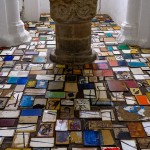 I left Syria, but never my memories of it. Revisiting them warms my heart. But when I remember my own childhood and think of what the children of Syria are going through today and how their memories and their homes and all the beautiful and fragile and delicate things that make up a child’s outer and inner life have been torn to pieces and are violently and suddenly buried in shattered fragments under the ground, hidden beneath the silent earth, it’s difficult for me not to feel a mixture of pain, shock and anger.

Over the last three years as a Syrian artist, I’ve been observing from a very painful distance the war machines and dictatorships of the 21st century eviscerating my homeland, its people, its society, its cities and villages, its past and present, its history and its memory.

I shudder to think of the heart-breaking number of Syrian children breathing destruction, or rather gasping for breath as the chlorine gas corrupts their young lungs. And of other children and their families being torn to pieces through gas bombs, car bombs and barrel bombs which are being used to silence the voice of the revolution and dissent, a revolution which broke the fear barrier and dismantled state censorship on all forms of expression.

Images of aerial bombardment of civilian neighborhoods, of deadly sniper fire and brutal street fighting, images of husbands, fathers, uncles, mothers and grandmothers, aunts and children dying. Stories of mothers pressured to marry off their daughters simply for the family to survive, photographs of children living in tents, crammed into apartments and hiding in villages and towns. Gruesome “unverified” images from amateur video footage uploaded daily to social networking sites with the Editor’s Notes: We are unable to independently verify the content of the video.

To bring all these to my studio (these moving images of the new norm in Syria) and to digest, respond and translate them into subtle form, with meaning and without anger, has been and still is a great struggle for me.

Unearthed is not a collection of images that will go viral, nor will it be rapidly shared for quick global consumption via social media.

My work is a quiet gesture, an archive to remember those who have been forgotten, and an invitation to ponder what the future might bring to what’s left of my people and of my country – ‘The country’ formerly known as Syria’ as it was painfully referred to in the February 23rd 2013 edition of the Economist Magazine.

With the conflict entering its fourth year, the largest humanitarian crisis in the world today, I fear for the displaced, uprooted and orphaned Syrian families and children. But I believe and hope that one day, with the help of all of us who care, they will be able find the lost pieces of themselves and start to rebuild a new Syria, whole and unbroken.

Unearthed is on show at Kettle’s Yard until 26 October 2014. On 9 October Issam Kourbaj will be in conversation with Kettle’s Yard Director Andrew Nairne, all proceeds will go to Médecins Sans Frontières. Find out more here.

The Times – I worry about family and friends in Syria

Kettles Yard – Sitting with the souls of Syria