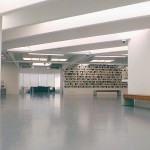 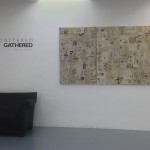 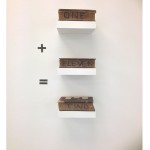 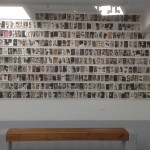 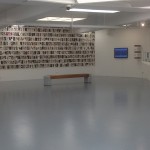 “The efforts must be made to speak of friendship as of a pure topic: this releases me from the level of affectivity—which could not be spoken without embarrassment since it belongs to the order of the imaginary…” Roland Barthes.

With these sentences which Roland Barthes wrote in his own unconventional autobiography, “Roland Barthes by Roland Barthes” (1977), the two artists, Nizar Sabour and Issam Kourbaj, bind their own biographies in this exhibition. The result is a collection of splendid artists’ books, and then, a collection of scattered memories between the two lifelong friends. The artists assemble an autobiography of their thirty years old friendship apart, displayed and re-gathered in “Scattered, Gathered” at CAP. Being both Syrian however immediately releases the eruptions and inexpressible sorrow caused by the current events in Syria into the exhibition space. Yet this, perhaps, also takes us back to Barthes and his own “Mourning Diary” where he preserved his brief daily jottings of his personal grief and suffering over his mother’s own death. Syria is Sabour’s and Kourbaj’s mother so as to speak, and their diaries mediate into a continuous process of mourning over their diseased and frail country.

The exhibition “Scattered, Gathered” curated by Abed Al Kadiri, strikes viewers with a sense of being suspended between pages of affectivity. While the relationship with books is both a public and private one, similarly, the relationship with grief is one that is at the verge of expressing to the outside and keeping to one’s self. On the one hand, Issam Kourbaj’s visual diaries are superimposed on 10,232 pages of Twelve Volumes of The Encyclopedia Britannica of 1890, and on the other hand, Nizar Sabour’s visual essays are created on eighteen handmade wooden books. Still, both diaries reside between the tensions of the imaginary; those of space and time. While Sabour records the date by the hour of his own diary entries experienced in the folds of the daily life in Syria, Kourbaj inscribes his images onto pages of ready-made collections of alphabetical knowledge, as if the artist is re-writing this knowledge from his own perspective as a Syrian in the UK and recreating a different collective memory.

Both artists present a minimalistic style in their art works. Sabour’s diaries convey panoramic scenes of people, walls, cityscapes and landscapes. His visual elements are portrayed in a childish manner using bright colours as well as different shades of black and white. The written words in his work offer viewers keywords and clues to complete the words of the titles further imagining a narrative of nostalgia. On the other hand, Kourbaj’s books presents no inscribed words but rather a nonlinear narrative. However, the primitive and raw nature of the lines on each page of The Encyclopedia Britannica compile into a story of repetitive shapes, as if creating their own letters and language taking us earlier than the period of 1890 andperhaps into the walls of caves.

The imagery in the diaries by both artists further resembles moments of development and evolution of the life of the two friends who took on their separate ways in different directions. However their diaries kept track of their own perceptions of the events around them. Even themselves as artists, Sabour and Kourbaj, are presented as a work-in process throughout the pages of their own diaries. In “Roland Barthes by Roland Barthes” the text itself is playful and the author inverts his text to become himself its very subject of enquiry. In a similar vein, Sabour and Kourbaj in their own diaries are their own subjects exploring the creation of their own knowledge according to their surrounding.

Proceeds from this exhibition will go towards Al Madad Foundation’s education and literacy programs, on the ground in Aleppo Syria. By equipping Syria’s most vulnerable children and families with the right tools and necessary skills, Al Madad Foundation enables them to rebuild their lives, country and empower a future generation that will not be lost to war. To learn more about this project, click here.