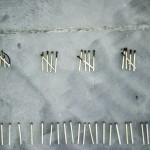 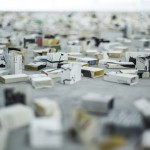 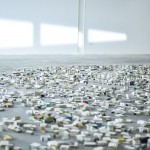 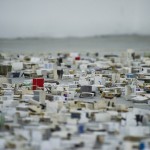 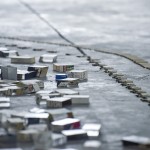 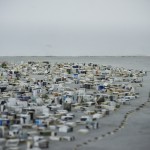 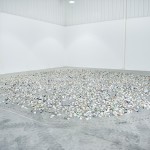 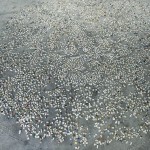 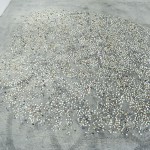 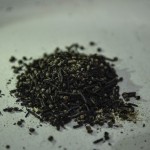 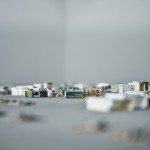 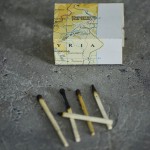 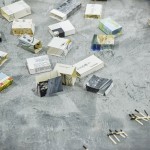 Taking the title of a Fairouz song, Another Day Lost is a series of installations by Syrian-born, UK-based artist Issam Kourbaj, inspired by the refugee crisis and made out of discarded books, sheet music, aerial photography, maps, medicine packaging and matches.

The overall appearance is that of a vast refugee ‘camp’, constructed from thousands of tiny paper and cardboard ‘tents’, many of which are marked with Kourbaj’s distinctive black lines (based on Arabic calligraphy and traditional mourning ribbons), and encircled with a ‘fence’ of matches.

The matches are burned as time passes, and arranged in tally marks to count the days: one burnt match for every day since the beginning of the Syrian uprising (15th March, 2011). Meanwhile, the new matches represent the uncertain future.

By repurposing discarded, commonplace materials, Kourbaj laments not only the loss of time, normality and everyday life for Syrians everywhere, but also the poor quality of life experienced by his compatriots in their displacement.

This will be the 9th edition of Another Day Lost, installed here to mark the fifth anniversary of the Syrian uprising (15th March, 2016). There will be a match burning ceremony every day at noon to add to the artwork and to commemorate the countless Syrian lives lost over the last five years.

Issam Kourbaj was born in Syria, and studied in Damascus, St. Petersburg and London. He is based in Cambridge, UK, where he is a Lector in art. Since 2011, he has been making works inspired by and based upon the worsening crisis in his home country.