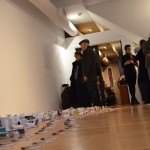 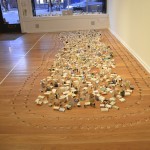 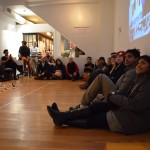 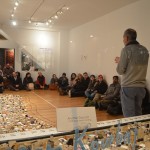 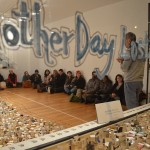 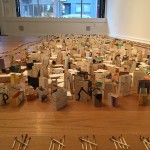 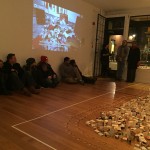 “transform(art)ive”: Art for Social Change is a series of 1 to 7 days of art exhibitions or provoked expression in conjunction with talks panel & discussions on issues of social justice, engaging and inspiring the community into critical thinking and empathetic understanding of the world around us. Issam Kourbaj’s project “Another Day Lost…”, curated by Louisa Macmillan and brought to 12G by Amina Ahmed is the first in this new series of exhibitions.

Another Day Lost is a series of installations by Syrian-born, UK-based artist Issam Kourbaj, inspired by aerial images of refugee camps and is made out of waste materials. Each installation is constructed from discarded books, medicine packaging and burnt matches. As one of the visitors in London commented: “Waste materials portraying wasted lives.” The overall appearance is that of a refugee ‘camp’, made out of thousands of tiny paper and cardboard ‘tents’, some of which are marked with Kourbaj’s distinctive black lines (based on Arabic calligraphy and traditional mourning ribbons), and encircled with a ‘fence’ of burnt matches.

The used, redundant matches reference not only the irreversible changes in everyday Syrian life but also the loss of thousands of lives. The matches are arranged in tally marks, which enumerate the number of days that have passed since the beginning of the Syrian uprising (15th March, 2011), and one match will be added to the artwork for each day while the conflict continues. On 24th February, there will be 1,808 matches.

By repurposing discarded materials and extinguished matches, Kourbaj laments not only the loss of time, normality and everyday life for Syrians everywhere, but also the poor quality of life experienced by his compatriots in their displacement. The installations were initially scattered around central London, in disused spaces and even a UNHCR tent, in a pattern loosely related to the diaspora of refugee camps that have arisen in the countries bordering Syria over the last five years. As the refugee crisis worsened on an international scale, Another Day Lost was also shown aboard a boat on the River Thames and exhibited for the first time in the USA in two tents in the churchyard of Trinity Wall Street, over Christmas 2015 and New Year 2016.

Kourbaj says: “Another Day Lost is an archive of loss and remembrance, not of the distant past, but of the very painful present; a present of lasting scars, abandoned humans and cities turned to dust. More than 1800 days have passed since the Syrian uprising, and the count goes on. Tragically millions of Syrians are still uprooted, displaced and orphaned and many are becoming citizens of a tent.”