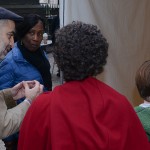 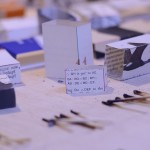 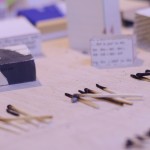 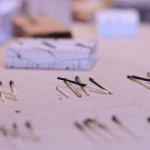 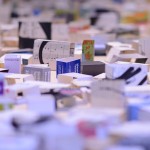 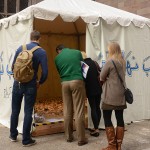 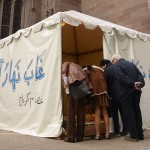 Another Day Lost is a series of installations by Syrian-born, UK-based artist, Issam Kourbaj, inspired by the ongoing Syrian Refugee Crisis.

In the white tent, Another Day (2015), shown here for the first time, is made up of approximately 1,750 burnt matches and one solitary ‘tent’ to highlight the amount of time lost by every individual person, family, city or even Syria itself, since the war began on 15th March, 2011. Kourbaj has spiraled the matches around the lone tent, as numerous as if they were countless, suggesting that the weight of time lost is strangling anyone who might live inside.

In the blue tent, Another Day Lost, inspired by aerial imagery of refugee camps in the Jordan, is shown here for the seventh time. Kourbaj created this ‘camp’ of thousands of ‘tents’ out of waste materials, such as medicine packaging and discarded books, which are marked with his distinctive black lines (based on Arabic calligraphy and traditional mourning ribbons). The ‘camp’ is surrounded by a ‘fence’ of burnt matches, which reference the irreversible changes in everyday Syrian life and the loss of thousands of lives.

Thirdly, in the Parish Center (2 Rector Street), Kourbaj and volunteers have installed a camp inspired by Another Day Lost that is big enough to step into. There is a horizon line or ‘fence’ of matches (paired with the artist’s tents in the entrance), which continues throughout the rest of the center. Members of the community are invited to step into this camp and, using Kourbaj’s process, to participate in making their own tents for the internal walls of the Parish Center. In addition, visitors will be able to use the adjacent computers to send electronic messages to their elected representatives.